A Total Commitment to Truth 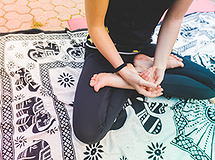 Anybody can awaken to the truth of being. And yet, when it is realized, often the person who has committed a large portion of his or her life to the spiritual path is more readily able to let go and flow with that realization than the person who hasn’t been on a spiritual path. Does that have anything to do with some sort of merit earned by sitting on a meditation cushion, or whatever the spiritual practice was? Absolutely not! It has nothing to do with that. It has nothing whatever to do with preparing the field, tilling the soil, or fertilizing the soul. It’s just that it’s possible, though not a guarantee, that someone who has made the spiritual search his or her priority in life is already in fidelity to truth when realization happens. Realization was wanted more than anything else, and his or her life has been a living, walking, breathing demonstration of this fidelity.

But if those who walk in off the street and realize the truth of their being want it just as much as those who put in decades of spiritual practice, guess what? They are at no disadvantage whatsoever. None. Zero. And by the way, having put decades into the spiritual life and spiritual practice does not necessarily mean that we actually value the truth more than anything else. It’s no guarantee. But to take awakening into enlightenment requires a certain sort of fierce commitment to the truth. It is a surrender to what is realized, a surrender to not be moved in the face of anything. And for anybody who loves the truth, really loves the truth, this surrender is not going to be avoided.

In the past, the deepest spiritual teachings were reserved for a very small part of the spiritual population. Those were the people who became monks or nuns or sadhus (renunciants), and committed their entire existence to get the teachings. You couldn’t get the teachings until you’d done that, walked away from family and friends and life as you knew it, and put everything on the line. And even then, teachers wouldn’t give the teachings to you immediately. They’d probably make you wait some years. Why? Because those few enlightened beings knew that to really take awakening to enlightenment or liberation was going to require that kind of commitment, that kind of love of the truth, and the kind of person who would put all their eggs into that basket, right there.

Today you do not have to live in that rarified spiritual environment or commit your entire life to get the teachings of the truth. And yet, to realize the truth and then take it all the way into living and being what you really are, fully and completely, the internal commitment is not any less. It can’t be any less because nothing less than a full, internal love of truth will do. If you love anything more than you love the truth, there’s no way this realization can complete itself. You can realize it, you can awaken, and you can have a nice enlightenment experience, but it’s not going to be something that’s going to be stable and effortless, or last forever. That’s just the physics of it. I’m not writing the rules. It’s just the way things are.

When you realize the truth, then you know that this truth is not fooling around. This truth wants you, and it wants your life, and it’s going to devour you and eat you up for dinner. The truth is not playing games. I’ve had more than one person say, “Adya, how do I turn this off? How do I back out of this deal? This isn’t what I signed up for.” And the only answer is, “Sorry, it’s too late, you can’t back out. You can walk away from me and from all teachers, and from spirituality altogether. You can go to the end of the earth and play some other game, but it’s too late. You can’t unrealize what you realize.” It’s a game until it’s not, but by the time you realize that it’s not a game, you can’t back out.

By and large, people want liberation, freedom, bliss, peace, love, and total release from fear. They want all the accoutrements of enlightenment without having to pay the price. They don’t want to pay the price of a total love affair, a total commitment. I’m not speaking of anything that is separate or different from your life. This doesn’t have anything to do with the monastery or leaving your day-to-day existence. The truth is here in every single moment of your life. That’s the truth. It’s not separate from your life. You can’t run away from yourself and your life in order to awaken to reality. Your life is your path to awakening. Stop and open your eyes: You were free from the very beginning.

Please understand that it’s not you that wakes up; it’s reality that wakes up, the truth wakes up. You are not enlightened; enlightenment is enlightened. Ultimately this realization doesn’t have anything to do with individuals, since there aren’t any separate individuals. That is the whole illusion, that there is something separate from the ultimate reality. When it’s clear that there’s nothing going on other than the ultimate reality, it’s a done deal -- enlightenment is effortless.

Excerpted from a talk in Mountain View, California, March 13, 2003.