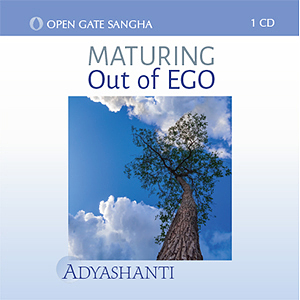 Maturing Out of Ego
1 CD $10.00 OTHER FORMATS:  AUDIO DOWNLOAD
Add to Shopping Cart

Why is it so hard to outgrow ego consciousness? Like other developmental phases such as infancy or adolescence, it is not only possible but natural to mature out of ego and the immense suffering it causes. In this retreat talk, Adyashanti has us first recognize how ego or self-image is just that -- an image we take to be solid and real. He then explores common unnoticeable workings of the “me identity” so that we may be free from its incessant and mesmerizing confinement.

Quotes from this CD:

“The spiritual impulse is to grow out of self-image.”

“We think the enlightened ones can stop their mind. No, they can’t -- they’re just not trying to.”

“The easiest possible way isn’t really to let go. The easiest way is to notice what’s happening, because then the letting go happens all by itself. Seeing the truth of things engenders the letting go, the awakening.”

“Every part of your experience is just happening, just spontaneously arising. The seeing of this is also part of the spontaneity.”

Please Note: The recording in this CD was originally published in the download set: Silent Retreat Vol. 57: Garrison 2017 ~ Talks


Recorded at Garrison Institute in Garrison, New York on April 10, 2017.