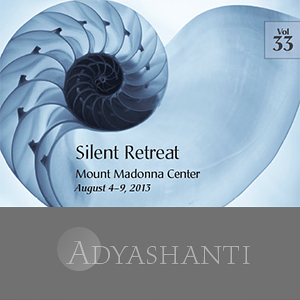 With over 15 hours of Adyashanti's most powerful form of teaching, this 15-CD album contains the engaging talks and insightful dialogues from the August 2013 silent retreat at Mount Madonna Center in Watsonville, California. This retreat is one in a series of live recordings from retreats with Adyashanti.

Please Note: Guided meditations are not included in this download set and must be purchased separately. The retreat recordings are also available in download form.

Numerous and Varied Topics Include:

Quotes from this Retreat Album:

"The antidote to fear is trust."

"To turn within doesn't mean to look inside. It's a way to counter a forward trajectory."

"You are taken outside of your psychological dimension, you don't do it yourself."

"Fear gets all of its energy from your resistance."

"You will never live up to your idea of perfection."

"The imagined self finds itself primarily in the reflection of others."

"Meditation is supposed to defeat you."

"Truth is a story, a flash of lightning in an empty sky."

"The only way to ultimately feel better is to come into alignment with true nature -- all else is a bandaid."

"Until you find the merciful act of redemptive love within yourself, it will be very difficult to overcome the sense of separation."

"There is a difference between 'being good' and 'being real.' Drop the 'good person' thing and do 'authentic human being.'"

"The only way to be in the now is to relinquish the personal will."

"The only thing that stands between you and God is an unclear mind."

"Be careful not to make ego the fall guy for everything. Remember, everything is God."

"Live the truest thing you know."

This 15-CD album is available for a limited time.