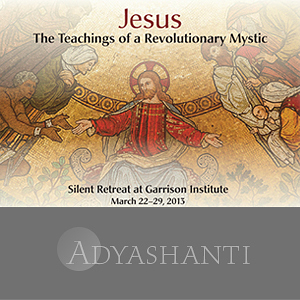 "If you understand who Christ is, you understand the totality of existence." In this unique 22-CD album recorded live on retreat, Adyashanti explores how the story of Jesus represents many facets of the path of spiritual awakening. Referencing biblical gospels and passages, he illustrates how Jesus' life not only demonstrates an awakening beyond the false self to our true divinity, but also how Jesus portrays the embodiment of divinity in human form. Through talks and dialogues with retreatants about their awakening process, Adyashanti also draws parallels between Christian and Zen stories as he helps to uncover lost jewels of Christianity.

Numerous and Varied Topics Include:

A guided meditation is also included in this set.

Quotes from this Retreat Album:

"Your very flaw is the thing that can redeem you."

"The only thing that can see the one everywhere is the one."

"It takes an extraordinary amount of humility to embrace our humanness."

"Let the stillness meditate you."

"The natural radiance of spirit is always looking through your eyes."

"Being attached to ultimate reality is its own illusion."

"Empty yourself of all identity, even divine identity."

"The thread of love runs through the Christian story -- it's love that says yes to incarnation."

"Stay with one thing -- the presence of your being."

"Consciousness is as adept at coming out of mind as getting lost in it."

"There's no prison until you believe the next thought."

"A story has the a power to creatively evoke your deeper nature. But if you put it in the world of time, it becomes a closed-end, locked door instead of a transparent mystery."