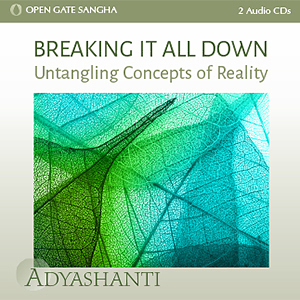 What actually is consciousness? What is awareness? How are these the same, but different? In this profound illumination and exploration of the fundamental nature of reality, Adyashanti offers two retreat talks in which he untangles commonly referenced concepts within spirituality. By delineating subtle distinctions of consciousness, awareness, and undifferentiated being, he provides a doorway into dimensions of awakening, and into the unified, redemptive, and yet ultimately unknowable nature of all existence.

Quotes from this CD Album:

“Awareness is That which is really the same, no matter what state of consciousness you might find yourself in, whether your consciousness expands to include the whole universe, or diminishes into a state of suicidal depression.”

“All phenomena are comprised of the will to be, from the tiniest particles that make up the phenomenal world to a human being’s instinct to survive and procreate.”

“Curiosity is the thing that really drives the whole of our spiritual inclination forward.”

Please Note: The recordings in this CD album were originally published in the download set: Silent Retreat Vol. 58: Tahoe May 2017 ~ Talks